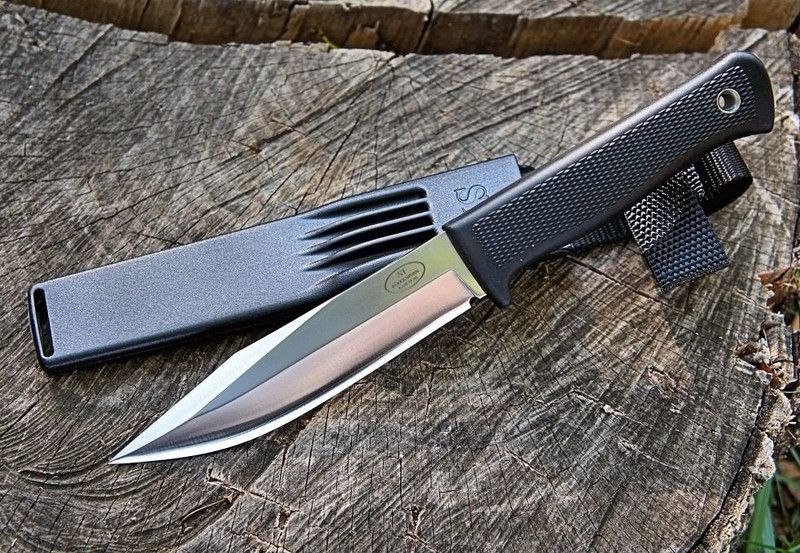 The A1 is one of those survival knives which really makes a difference, both from a style perspective and also as regards practicality and usage. The A1 already has a legendary reputation amongst enthusiasts so I was already pretty much acquainted with all its features. It’s a sturdy knife, with an ultra-sharp blade and with a finely contoured handle which allows for maximum grip especially in greasy and wintry conditions. It is an Army survival knife unlike the world famous F1 which is the standard issue survival knife for the Swedish Air Force but the features are practically the same.

The A1 knife is slightly shorter than other comparable knives such as the Pacific and is about half an inch less long with the handle being of similar proportions. However the cutting edge is one of the longest I’ve reviewed and it is also slightly lighter than other comparable models. The blade steel is laminated VG10, reputed to be the best steel in the world at the moment. The blade is made for tough tasks just the F1 so it is extremely strong and performs log cutting and other similar heavy duty tasks with ease. The knife is truly up there at the top of the survival knife business, comparable with models such as the Pacific but surely much better in terms of functionality and prowess. One can also observe that the blade spine is of a squarely ground characteristic and it can also be used as a fire starter with a separate striker – pretty handy when you are in the depths of a forest and wanting to start a fire to heat yourself up or to cook some freshly shot game.

With a relatively short handle and a pretty long heavy blade, the balance of the knife is well kept although at times it feels slightly sluggish and the blade heavy. The forward weight should give it a striking advantage when used for chopping although a saw would perhaps be better suited to this kind of task. However as amply demonstrated, the A1 is a superb splitter of wood and this characteristic is actually enough to seal the knife’s recommendation. Its long blade means that you can split logs which are up to six inches in diameter. In this respect it is similar to its brother the F1.

The handle is made of a type of rubber called Kraton which is slightly overmoulded and properly textured however it seems to handle much better than the F1. The A1 works well when your hands are in gloves so it is ideal when used in very cold or freezing environments since your hands are kept in complete isolation from the blade steel. It could also be useful to work in gloves when using the knife to probe into live circuits although that isn’t something which springs to mind when using the A1.

A feature which I noted on the A1 is that the knife shines a bit too much (it actually glints) since there is actually no blade coating. Some may argue that this lack of coating does not make it useful for a desert location although this is not really an issue when using the knife for normal purposes. Actually it can also be used as a signal instrument. The knife is actually plain and very functional but that is a typical characteristic of Fallkniven and any other Swedish product, no frills is the name of the game.

As with the F1, the tang of the blade passes right through the handle so the knife is pretty useful to be used to hammer into an object such as a tree log which can then be split. The A1 scores points however where the edge is concerned since it is actually a convex grind and is tremendously sharp from the first time you use it. This also makes it useful for tasks such as hair shaving and suchlike. It is obviously very useful in survival situations such as skinning and cutting up game animals.

Comparisons with other knives may be useful but at this point, I still believe that the A1 is probably the best knife in its class. It might not be as glamorous or alluring as other similar knives which are comparable in cost but in true Fallkniven tradition it offers incredible sturdiness, durability and reliability.

The sheath is also an issue if you want to spend a little more money since the A1 is offered in a slightly standard sort of sheath which could be easily upgraded by buying something like a Combat Master. However that is really something secondary when it comes to the actual performance of the knife which is second to none in every aspect. The A1 is really a knife for all seasons.