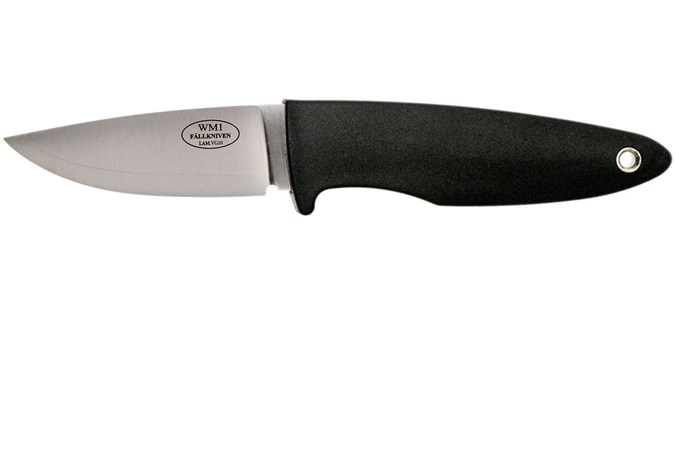 A knife for women? Most knife enthusiasts and macho men would probably sneer at such a suggestion.  But when presented with Fallkniven’s WM1, you realize that this concept can make real stylistic if not practical sense since this really an implement which has all the characteristics of a real professional knife. We all know that the female population outnumbers the male by a long chalk and the WM1 is actually the first sheath knife which is totally designed to suit the shape of the hands and the needs of a woman.

The WM1 comes with a blade design which is not in the least aggressive and has an extremely well made handle which is tailor made for a woman’s requirements. The leather sheath is robust without being aggressive making a package which is totally complete and oozing functionality. The clean lines of the knife are not actually an objective but rather, the most important issue remains functionality in the context of a knife which is made for daily use.

You would expect a knife for women to be slightly less sharp than the norm but this is certainly not the case with the WM1. Here we have a convex ground blade which has immense strength but which has a sharp edge which is ideally suitable for any sort of task but particularly whittling. As with all Fallkniven knives, the handle is given a lot of importance and the WM1 is no exception with a handle which is ergonomically designed and very comfortable. This gives an excellent and very secure grip in all types of weather, sweltering heat or freezing cold which enables the absolute control of the edge positioning. And the WM1 is also very hygienic so it’s particularly easy to clean, something which should go down well with its female owners!

The blade which is extremely powerful runs through the handle with its complete width and with the world’s best steel in use, this knife (like all other Fallkniven knives) is practically indestructible. There is also the option of ordering the blade in laminated powder steel which will considerably improve the edge retention.

And like with all Fallkniven knives, the VG-10 rust resistant super steel is put through an extremely rigorous and exhaustive testing processing which aids in the achievement of incredible strength as well as improved edge retention. This is certainly not a knife for the faint hearted female!

One can also note that the Zytel Sheath that comes with this model is also something quite special. It is completely new design which uses an injection moulded mechanism and this offers a combination neatness as well as safety which cannot be overlooked and which makes it highly desirable for any potential user of the knife. The ingenious locking mechanism stores the knife in its sheath until it is used again and the way it is stored makes it very easy to pull the knife out with just one hand.

The knife’s dimensions are also pretty much what you would expect from a knife of this calibre. It is 6.9 inches long or 175 mm with a Blade length of 2.8 inches or 71mm. The blade is 0.14 inches thick while its tang is a broad one. The knife weighs just 70 grammes so it makes it very light to carry around and even if used in the sheath around the neck, you will hardly notice it being there.  The blade is as hard as one would expect with 59 HRC rating whilst the Thermorun handle ensures the most comfortable and easy to use material even in wet and sticky environemnts.

Although the WM1 is described as being a woman’s knife, this does not mean that it cannot be used in rough environments such as for hunting and in the forest. It can cut up wood with ease and is also a dab hand at skinning animals after killing them for game. Several users have described it as an excellent option when removing the insides of a deer since its dimensions are particularly suited for working inside such cavities.  Obviously it also very good to use in the kitchen for domestic tasks since that is what it is actually made for so you can rest assured that it will cut up vegetables and meat without any qualms at all. The WM1 is a knife which portrays all the qualities of the Fallkniven brand and brings a new dimension to this sphere with women never being the same again with their WM1 in their belt!